Does your app properly destroy session? 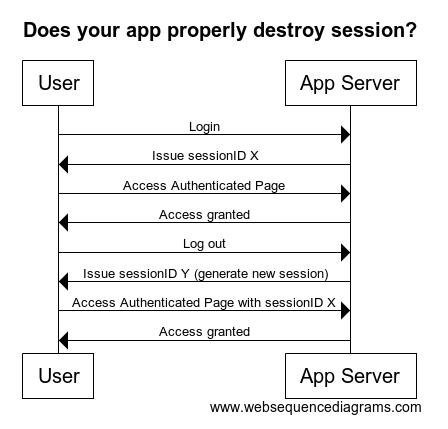 Popular posts from this blog

Update 2016/02:
We were asked by a lot if this still works.  Shortly after our disclosure, this issue has been patched.

------
The Background - The Past
Gaining access to HttpOnly cookie was first attempted by means of XST, Cross Site Tracing vulnerability.

Soon after the popularity of XST, the TRACE method has been disabled by most web servers.  Later, browsers' implementation of XMLHttpRequest also blocked "TRACE" method (i.e. xmlhttp.open('TRACE', url, true)].  Later, a flawed implementation in Firefox's XMLHttpRequest which can be used to access set-cookie response header was fixed.

We have been seeing authentication session ID appeared in URL Query String/REST URI and page body.  The use of session ID in Query String is to enable session tracking for web browsers which disable or do not support browser-based cookie mechanism.  This is commonly seen in Java web applications and cookieless mechanism in ASP.net web applications.

From what we have seen so far, the session ID in page body is used as anti Cross Site Request Forgery token or anti-cache parameter though it is not very common.

It should be noted that even though developers use the "HttpOnly" session cookie,  the above-mentioned  leakages of session ID in URL and page body nullify the effectiveness of "HttpOnly" flag.  This no doubt leads attackers to gain access to the HttpOnly session cookie via an Cross Site Scripting (XSS) vulnerability as JavaScript can read anything in the page body and URL information.

By YGN Ethical Hacker Group - April 01, 2018
If you look at KingRoot  web site (https://kingroot.net),  you might accidentally assume that it can root any Android devices.   KingRoot mobile app and desktop app will attempt to root any devices you aim at.

If you want to own and buy rootable devices by checking KingRoot supported devices,  it is not recommended.

The most viable route for nearly guaranteed rootabiliy is to use a list of devices that TWRP supports.  Refer to using https://twrp.me/Devices/

The reason for sharing this post is if you search rootablily for a particular device,  there will be lots of confusing posts from individuals web blogs and forums.

We feel rooting Android should be as simple as rooting iDevices.
Read more